iflix, the leading Subscription Video on Demand (SVoD) service for emerging markets, offering subscribers unlimited access to thousands of TV shows, movies and more, is pleased to announce the launch of its Channels feature which will provide audiences access to some The Walt Disney Company’s popular, award-winning content.

iflix users will be able to access many of Disney’s biggest films, featured in app and at iflix.com, in their own branded channels including:

Users will be offered an exceptional viewing experience with all new titles available to stream in HD format with upgraded audio on the user’s personalized iflix homepage.

Additional titles coming to the service from January 2018 include – Star Wars: The Force Awakens, Marvel blockbuster hits including Captain America: Civil War and Ant-Man, Disney’s The Jungle Book, Zootopia, and Tangled, and Disney-Pixar animation favorites like Finding Dory, Finding Nemo, Inside Out, Good Dinosaur, and The Incredibles! 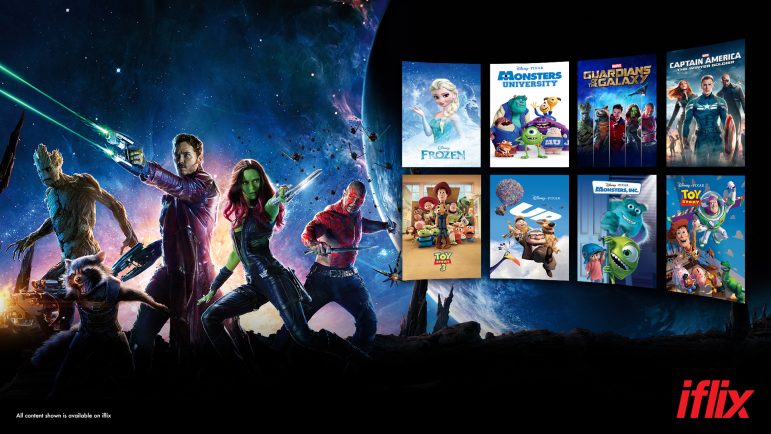 Disney will also make many of its most iconic and beloved children’s content available for young viewers and families to enjoy, including Disney Junior’s Sofia the First, Disney Channel’s Star Wars Rebels and Disney XD’s Guardians of the Galaxy.

The two companies will also extend their existing distribution deal for ABC Studios’ most highly acclaimed and popular shows, including Scandal, Grey’s Anatomy, Criminal Minds, Devious Maids, Quantico, Marvel Agents of S.H.I.E.L.D., Once Upon a Time and more.

The agreement between iflix and Disney covers content distribution, early window movie availability and will also include a project with Disney production arm and subsidiary, Maker Studios. The content will be released as an iflix original, exclusive to iflix.

iflix Group Chief Content Officer, Sean Carey said: “Disney has a story for every age. iflix is committed to providing the best in entertainment from around the world and this SVOD partnership in the region will bring Disney brands and premium titles to our members across the region. At iflix, we have committed to offering the best content available to our subscribers, this new partnership with Disney is key to delivering on that promise.”

“We are pleased to partner with iflix to bring Disney content even closer to fans in southeast Asia”, said Amit Malhotra, General Manager, Media Networks, The Walt Disney Company Southeast Asia. “Through the extensive library of content available on the new Channels feature, fans of all ages will have a unique access to their favorite stories and characters anytime they want.”

Now available to over one billion consumers across 20 territories throughout Asia, the Middle East and North Africa, iflix will make its world-class service available in Sub-Saharan Africa in the coming weeks. Offering consumers, a vast library of top Hollywood, Asian and Middle Eastern regional, and local TV shows and movies, including many first run exclusives and award-winning programs, each subscription allows users to access the service on up to five devices, including phones, laptops, tablets, and television sets, for viewing wherever, whenever.

For new subscribers, iflix offers a complimentary one-month trial with full access to its service, features and content. Go to www.iflix.com to register.

iflix is the world’s leading Subscription Video on Demand (SVoD) service for emerging markets, offering users unlimited access to thousands of TV shows and movies from all over the world. With a huge selection of your favorite comedies, drama, Korean drama, Turkish drama, Bollywood, Nollywood, cartoons, movies and more from Hollywood, The UK, Asia, the Middle East and Africa. iflix places the entertainment you want at your fingertips. For one low monthly fee, iflix subscribers can watch on their mobile phone, laptop, tablet, TV… wherever, whenever.