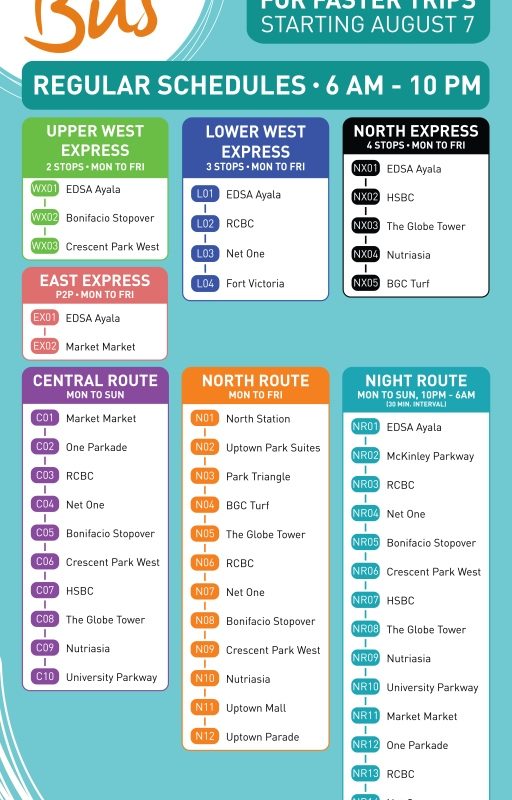 BGC recently announced improved bus routes and schedules that will help lessen passengers’ waiting time. The new routes were developed based on historical data of foot traffic and travel time.

Starting August 7, Monday, Express buses plying different routes will be optimized with fewer stops so passengers can get to their destination faster.

For instance, two new routes, the Upper West and Lower West Express buses, will only have two and three stops, respectively; while buses in the East Express route will carry passengers via a P2P (Point-to-Point bus). In the meantime, buses driving the North Express route will have four stops.

Going home late won’t be a problem anymore, as each Express bus will now be accessible to the riding public from 6am to 10pm.

Sean Luarca, BGC’s Marketing Manager shares “The BGC Bus is considered the main transport system within BGC. We have the commuting public in mind when we decided to redesign the bus routes, stops, and schedules. By assessing historical data, we have come up with a system to help alleviate passenger wait time so BGCitizens and guests can reach their destinations safely and conveniently within the shortest time possible.”

Based on records, the BGC Bus serves a total of 41,000 passengers per day.

For more information regarding BGC’s updated bus routes and schedules, check out the image below. You can also visit their website at www.bgc.com.ph or email info@bgc.com.ph. You can also check their Facebook at www.facebook.com/bonifacioglobalcityph.